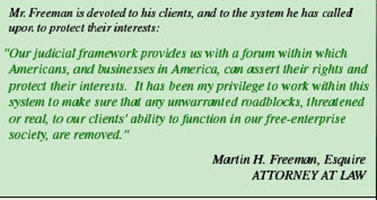 Martin Freeman is the founding partner of Freeman & Freeman, P.C. He has been lead counsel in over 300 civil jury trials. He has handled matters in 22 states, the District of Columbia, and in federal courts across the country. He is rated as preeminent counsel in Martindale-Hubbell’s published peer rating system for lawyers, and is Maryland’s only diplomat in the American Board of Trial Advocates. He has been named by the Maryland, District of Columbia, and Corporate Counsel Editions of SuperLawyers Magazine as one of the nation’s top attorneys in the field of business litigation. The George Washington University National Law Center has honored him with its Professional Distinction Award. Mr. Freeman holds the rank of Master of the Bench in the American Inns of Court. At the request of the Honorable Howard T. Markey, former Chief Judge of the Court of Appeals for the Federal Circuit, he introduced the American Inns of Court program to Maryland, enlisting as members the Honorable Robert C. Murphy, then Chief Judge of the Maryland Court of Appeals, along with other appellate and trial judges and Maryland’s leading trial attorneys. At the invitation of the Maryland Court of Appeals, he was named to the Maryland judicial conference faculty. He is a frequent lecturer to lawyers and judges, and has been featured in American Lawyer Magazine.

A byproduct of Mr. Freeman’s public service assignments has been the development of sharply-honed business instincts. He has served on the Metro Washington Council of Governments, as President and Chairman of the Greater Bethesda-Chevy Chase Chamber of Commerce, as People’s Counsel to the Maryland Public Service Commission, as Mayor Pro Tem and Councilman for the city of Bowie, and as a member of the Maryland General Assembly Task Force on Utility Rights and Practices.

His Intellectual Property litigation has dealt with weapon systems, apparel design, medical devices, nutritional supplements, and petroleum recovery. Before practicing law, he was a patent examiner with the United States Patent and Trademark Office.

Mr. Freeman has been retained by insurance carriers to defend their insureds, and to litigate complex insurance disputes. Those carriers have included, among others, Aetna, Allstate, Nationwide, Liberty Mutual, The Maryland Automobile Insurance Fund, The Hartford, Erie, and Lumberman’s Mutual.

To get directions to this location, click "Directions" or "View larger map" on the map below (Google Maps will open in a new window).